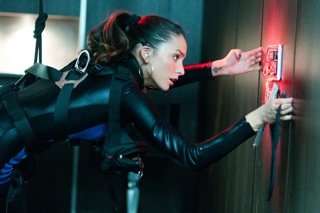 In Man on a Ledge, newcomer Genesis Rodriguez plays Angie, a loyal woman who helps her boyfriend (Jamie Bell) steal a diamond from a shady businessman (Ed Harris).  Their clandestine operation is aimed to prove the innocence of the boyfriend’s ex-cop brother (Sam Worthington), who’s planted himself on a Manhattan ledge to serve as a diversion.

Rodriguez also has a co-starring role in Will Ferrell’s comedy Casa De Mi Padre (House of My Father), which centers on a rancher’s son (Ferrell) who falls in love with his brother’s (Diego Luna) fiancee (Rodriguez).  “It’s incredible,” says Rodriguez, when asked about Ferrell’s command of the Spanish language. “He can improvise in Spanish.  He learned on Rosetta Stone!  He would even say bad words.”