SAM WORTHINGTON GOES OUT ON A “LEDGE” IN MANHATTAN THRILLER 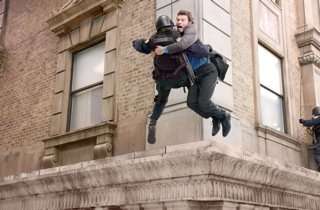 Sam Worthington, seen last year in The Debt and Texas Killing Fields, kicks things off this new year with Man On A Ledge, where he plays an ex-con who threatens to jump off the ledge of a Manhattan hotel.  Our protagonist’s (or is it anti-hero?) stunt is not borne from suicidal tendencies, as he’s out to prove a shady businessman (Ed Harris, looking to top his delicious maliciousness  from A History of Violence) holds a $40 million jewel.

Upon first glance I thought this would be a rehash of Joel Schumacher’s solid 2002 drama Phone Booth, which had Colin Farrell stuck a booth in real time.  The trailer shows that Man On A Ledge is a lot less claustrophobic than Phone Booth, with Jamie Bell (The Adventures of Tinton) seemingly playing a substantial part in the ex-con’s operation.

Most January films suck the high hard one, but at least the Man On A Ledge trailer (the movie comes out January 27th) looks promising.  Plus, it’s good to see Edward Burns, who’s devoted the last several years shooting and acting in indie movies, back on the big screen.  Check out the trailer, and tell us what you think.

Click on the media bar to hear Mr. Worthington explain why, when doing films, he prefers to keep his head down and “stay out of trouble”  –