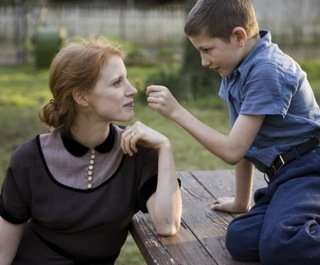 Is it just me or was Jessica Chastain in every other movie that was released this year?  In 2011, the once unknown actress graced us with The Tree of Life, The Debt, Take Shelter, The Help, Texas Killing Fields, and Coriolanus!  To put the proverbial icing on the cake, Chastain received a Golden Globes and Critics Choice Award nod for her work in The Help.

I had the pleasure of sitting down with Chastain as she promoted The Tree of Life and, later in the year, The Debt. My favorite story from the two interviews came from Chastain’s recollection of almost introducing herself to Robin Williams. Thanks to the Oscar winning actor, Chastain’s Julliard School education was funded by Williams.

Click on the media bar and listen to Chastain talk about her synchronistic encounter with Mr. Williams:

Chastain will be seen in 2012 with Shia LaBeouf and Tom Hardy in director John Hillcoat’s (The Road, The Proposition) latest drama, Wettest County.