THE X FACTOR’S NICOLE SCHERZINGER: ERRING ON THE SIDE OF SYMPATHY? 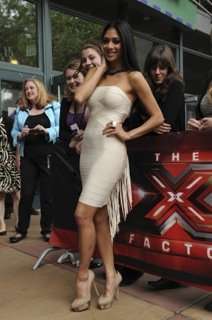 Nicole Scherzinger, the Over 30s Mentor for The X Factor, has her heart in the right place.  Picking Dexter Haygood, who previously lived on Skid Row, has surely changed his life. And since The X Factor is not just a singing competition, Scherzinger believes Haygood has more star potential than two other singers who blew Haygood out of the water: James Kenney, who performed an inspired rendition of Rihanna’s “Russian Roulette,” and soft-spoken wedding singer Elaine Gibbs, whose spirited take on Oasis’ “Stop Crying Your Heart Out” (a song Stacy Francis should adhere to) was also a standout.

Click on the media bar and listen to Scherzinger explain why The X Factor is not just about the judges:

Scherzinger, who bounced off her thoughts with fellow singer Enrique Iglesias, questioned if Kenney was a true front man and if Gibbs had superstar potential.  Meanwhile, Haygood, whose histrionic dance moves are feeble mimicries of James Brown and Mick Jagger, and the always ready to cry Stacy Francis made Scherzinger’s final cuts (along with Jacob Krajcik and LeRoy Bell).

Five singers will be cut by the judges on tonight’s two and a half hour installment of The X Factor (Fox, 8 pm et/pt) and if the show continues to emphasize drama over vocal prowess, then Dexter Haygood and Stacy Francis will continue to survive and thrive (although Francis’ take on “Purple Rain” during the mentoring rounds almost won me over).

Do you think Haygood or Stacy Francis were the correct choices for tonight’s Top 17, or were Kenney and Gibbs robbed?  Who’s your favorite X Factor contestant (mine, ironically, comes from Scherzinger’s camp: Josh Krajcik).  Are the X Factor judges making the right decisions?  Is it too late for Gibbs and Kenney to try out for The Voice??

Here’s a performance you didn’t see from James Kenney during his X Factor run: