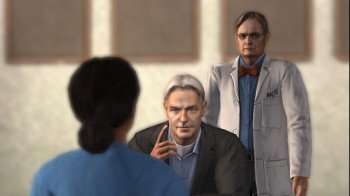 It’s not every day that two highly respected (and maybe one would deem iconic) actors would lend their voices to a videogame, but Robert Wagner (TV’s Hart to Hart) and David McCallum (The Man from U.N.C.L.E.) have done so with the upcoming NCIS videogame, which hits Xbox 360, PS3, the PC, and Wii on November 1st.  McCallum is known to NCIS devotees as Dr. Donald ‘Ducky’ Mallard on the show, and Wagner has guest starred on the series as Tony DiNozzo Jr.’s (Michael Weatherly) dad Anthony DiNozzo Sr.

Wagner, who’s 81, has been a showbiz fixture since 1950, and if you’re not familiar with his film work, check out his lead performance in director Nicholas Ray’s Western The True Story of Jesse James and Prince Valiant.  As for McCallum, who has also been working since the ’50s, he’s primarily known for his work on The Man from U.N.C.L.E., but he also was featured in director John Sturges’ finest film, The Great Escape.

It’s a cliche, but it really is fun to see two old pros tackle an entirely new medium (McCallum has done videogame work before).  Check out the Ubisoft video below: