HANK AZARIA TALKS ‘THE SIMPSONS,’ GIVES HIS TAKE ON DUFFMAN AND BUMBLEEBEE MAN 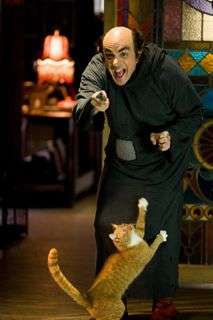 Hank Azaria, who plays Gargamel on the upcoming film The Smurfs, recently talked about the prodigious success of The Simpsons, which premiered back in December 1989.

“When we started, Fox was a fledgling network, you didn’t think the network was going to last,” says Azaria.  “Let alone the show.  So it’s completely surreal, but you can’t always be aware of that or you wouldn’t be able to do the job.  On the other hand, it’s such routine at this point.”

Over ten years ago, Hank Azaria visited his alma mater, and he was surprised to see how many of his younger colleagues were influenced by The Simpsons. Click on the media bar below to hear Azara discuss his experience returning to Tufts University:

Azaria also talks about two of the characters he has voiced on The Simpsons.  Click on the media bar and listen to the actor talk about the challenges of voicing Duffman and Bumblee Man.

Glenn Close Got No Bad Reaction From...