AUDIO FILES/CONTENT
May 26, 2011
By Hollywood Outbreak 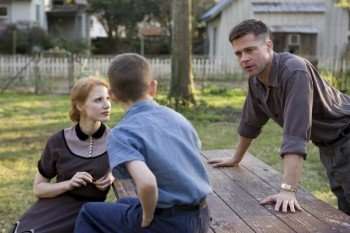 Although he is one of Hollywood’s most popular movie stars, Brad Pitt has refused to cash in on his movie star good looks to star in forgettable Hollywood blockbusters.  His sole franchise piece (the Ocean’s Eleven films) was directed by one of Hollywood’s most gifted technicians (Steven Soderbergh), and though a bit disposable, Mr. and Mrs. Smith and Troy still exist as extremely watchable diversions.  He’s done inspired work in Fight Club, The Curious Case of Benjamin Button, and The Assassination of Jesse James by the Coward Robert Ford.

He gives one of his best performances as an abusive dad raising a 1950s family in director Terrence Malick’s latest epic The Tree Of Life.  Pitt, who produced the picture, actually had reservations about the part.  “I was a little hesitant about playing the oppressive father, but I felt the story was so important and for me it was really about the kids’ journey,” said Pitt during a press conference at the Cannes Film Festival.  “And I think about everything I do know, my kids are going to see when they grow up, and (I think) about how they are going to feel.  They know me as a dad and I hope they’ll just think I’m a pretty damn good actor.”

Click on the media bar and listen to Pitt explain why he does character driven material and avoids films like Mission: Impossible. [MEDIA=4699]

The Tree of Life opens Friday.

‘Philadelphia’ Was An Easy Choice For Tom...