AUDIO FILES/CONTENT
May 25, 2011
By Hollywood Outbreak 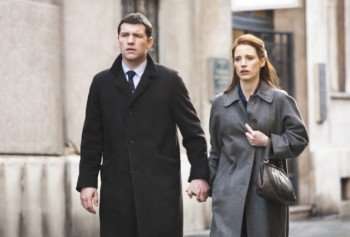 Thirty-year-old actress Jessica Chastain is a relative unknown these days, but that will quickly change after her featured roles in director Terrence Malick’s latest movie, The Tree of Life (opening Friday) and The Debt, a remake of the 2007 Israeli film Ha-Hov.

During our interview with Chastain (who was promoting The Tree of Life), the actress talked about her role in The Debt. “It’s a very dark character,” said Chastain about the film, which co-stars Sam Worthington.  “I play a Mossad agent who goes in 1965 in East Berlin to capture a  war criminal who’s working as a fertility doctor and she becomes his patient,” said Chastain.  “So I did a lot of research about the Holocaust and medical experiments and I took Krav Maga and I learned German because I speak a lot of German in the film.  And I speak with an Israeli accent and got to rehearse with Helen Mirren because we play the same woman.”

Click on the media bar and listen to Chastain talk about the physical challenges of making The Debt. [MEDIA=4693]