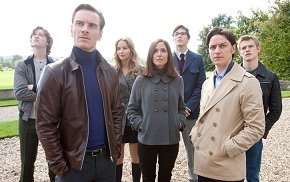 X-Men: First Class, directed by filmmaker Matthew Vaughn, could be the franchise’s strongest installment, as the picture delves into the early friendship between Charles Xavier (James McAvoy) and Erik Lehnsherr (Michael Fassbender), mutants whose clashing philosophies would eventually lead to the epic battles between Xavier’s group The X-Men and Lehnsherr’s (aka Magneto) Brotherhood of the Evil Mutants. But as the trailer suggests, these band of super beings are working together to aid the government during the Cuban Missile Crisis.  Fassbender, who delivered a riveting performance earlier this year in Jane Eyre, should pretty much blow McAvoy out of the water in every scene in X-Men: First Class. And as a Marvel fan, that’s not a dig on McAvoy; Professor X, with all his good intentions and dreams of a united front, is a far less showy and charismatic character than Magneto.  Women dig bad boys, and movie buffs who have a tinge of a superiority complex should dig Magneto too.  Plus, Matthew Vaughn has only directed excellent films (Layer Cake, Stardust, Kick-Ass), so you can bet  X-Men: First Class, when it opens June 3rd, will be a crowd pleaser.