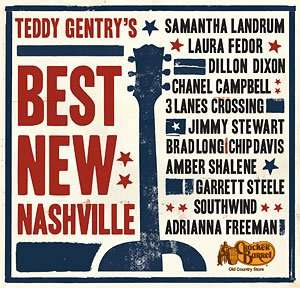 Teddy Gentry has long been celebrated as a member of the country supergroup Alabama, and he is also the force and inspiration behind multiple other music successes in Nashville.

Now, Gentry, and Porter-Gentry Productions, are lending a guiding hand to a very special CD that provides country music fans with an inspired assortment of new music.

Each pairing of song and artist on this CD was carefully considered and planned by Gentry, who collects songs the way some people collect stamps.

Gentry regularly works with up-and-coming artists on stage and in the studio, and his advice in choosing a new song is to always make sure that there is an emotional connection. “I tell them that they really have to love a song because, if it’s a hit, they’ll be performing it for a very long time,” said Gentry.