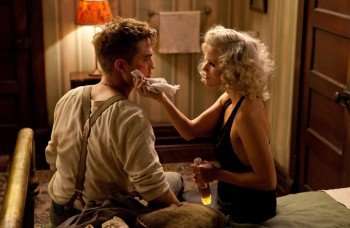 With his new film Water For Elephants, Robert Pattinson stars as Jacob circus veterinarian who falls in love with Marlena (Reese Witherspoon), the wife of an ill-tempered ringmaster (Christoph Waltz).  Based on Sara Gruen’s bestselling Depression-era set novel, the picture was directed by Francis Lawrence (I Am Legend) and shot by renowned cinematographer Rodrigo Prieto (Amores Perros, Brokeback Mountain).

“I think it definitely has a lot of romantic elements to it,” said Pattinson, when asked what his fans should love about Water For Elephants.  “I think it’s a pretty beautiful movie, I think it’s different to a lot of other stuff that’s come out.  I haven’t seen anything like it in a few years.  When I was making it I felt like I was being transported somewhere else and hopefully that will be captured in the movie.”

Click on the media bar and listen to Pattinson talk about the on-set environment of Water for Elephants.