‘SUPER’ ACTRESS ELLEN PAGE: ‘I DON’T GO OUT REALLY MUCH’ 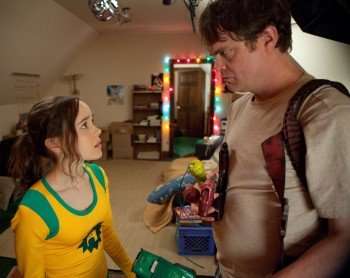 At just 24, Ellen Page has received an Oscar nomination (Juno), played a popular Marvel Comics character (Kitty Pryde in X-Men: The Last Stand), and is also developing an HBO project titled Stitch and Bitch. But who in the world knew Page is literally a juggler (check out the Zap2it.com article)?

With her latest film Super, Page plays a sociopathic youth who joins the Crimson Bolt (Rainn Wilson) in his quest to save his wife (Liv Tyler) from a drug dealer (Kevin Bacon) and his band of thugs.  As the crimefighter Boltie, Page gives one of her gutsiest performances to date (it’s right up there with Juno and Hard Candy). “The amazing thing about James Gunn (Super’s director) is he wrote a great script,” said Page. “And he created a character for a young woman that I’m just excited about and filled with gratitude for.  Because it’s far and in between –  interesting roles for young women.”

Ellen Page explains why she loves losing herself in her roles.

The actress talks about her not having much of a social life.

Click on the media bar and listen to Page describe herself as a “dork.”

Get the Flash Player to see the wordTube Media Player.
Super is now playing in select theaters.