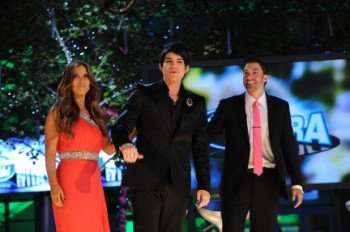 Fresh off his acoustic performance of  “Aftermath” on American Idol, Adam Lambert briefly talked about the follow up to his hit album For Your Entertainment.

A re-mix version of “Aftermath” is available on Adam Lambert’s official website, and proceeds will go to benefit The Trevor Project, a national organization aimed at crisis and suicide prevention among lesbian, gay, bisexual, transgender and questioning youth.  Click on the media bar and listen to Lambert talk about recording the re-mix version of “Aftermath.” [MEDIA=4400]

Lambert’s first ever live DVD/CD (Glam Nation Live) comes out March 22nd, and the singer says the collection “captures the spirit” of his six month Glam Nation Tour, which had him traveling around the world.  “I think there is a universal power of music,” said the former Idol finalist.  “I learned a lot about that while being on the road.  I would go to countries where people weren’t speaking English as their first language, yet they knew the lyrics to almost every song.  It’s incredible how it can pull people together and it can move you, no matter what language you speak, no matter what your background is, no matter what your age is, or your preference, or religion.  It can move you.”

Click on the media bar to hear Lambert talk about being a role model. [MEDIA=4401]

The Final Season Of ‘Supergirl’ Set To...

The CW's Tuesday will become even more superpowered when SUPERMAN & LOIS gets a helping hand from their Kryptonian cousin this spring as SUPERGIRL...
Read more

Last year's American Idol was a season like no other, as the COVID-19 pandemic made it impossible to produce the live shows in the...
Read more

‘Party Down’ Revival In The Works At...

Starz today announced it is reviving the party and developing a six-part "Party Down" limited series. The new original comedy is being developed and...
Read more