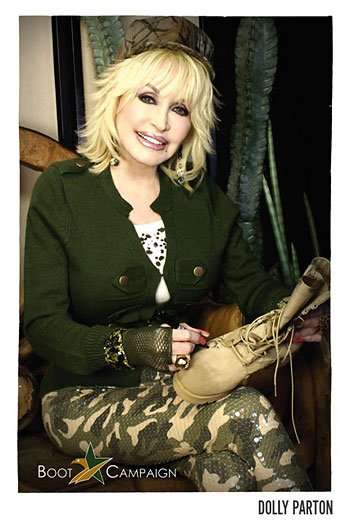 Dolly Parton Boot Campaign, where proceeds from the boot sales are donated to partner charities, including the Lone Survivor Foundation. ©Boot Campaign

“So many people, regular folks and celebrities, send out love and sincere thanks to you for keeping us safe and fighting for our freedom.  Let me add to that loving list.  Thank you from the bottom of my country heart.  I will always love you,” Dolly Parton (her personal signed note reads).

It all started back in 2009 when the Boot Girls asked celebrities at the Country for Our Country benefit concert to pose in army combat boots for an online photo gallery used to rally support for returning troops.

Shortly after a host of celebrities, politicians and sports figures teamed up with the Boot Girls to put their boots on for the Boot Campaign.

The campaign encourages Americans to purchase a pair of army combat boots to wear in support of our troops.

Proceeds from the campaign’s signature boots go towards military charities supporting the needs of Veterans, including the Lone Survivor Foundation.

For more go to www.bootcampaign.com