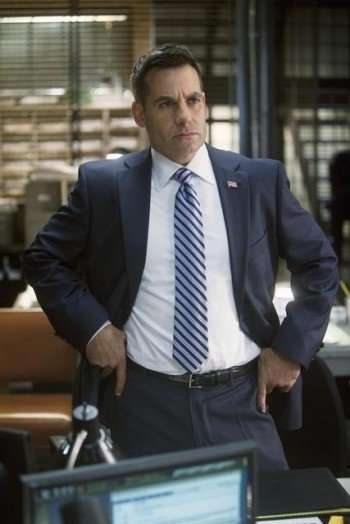 Castle and Beckett investigate the apparent robbery-homicide of a New York cab driver, only to discover that the victim was involved in a mysterious conspiracy with unimaginable consequences. As the stakes continue to rise, hard-charging federal agent Mark Fallon (guest star Adrian Pasdar) takes over the investigation. Together, Fallon, Beckett and Castle must race to unmask the truth about the victim before it's too late, on "Castle," MONDAY, FEBRUARY 21 (10:01-11:00 p.m. ET) on the ABC Television Network. (ABC/RANDY HOLMES) ADRIAN PASDAR

He’s guest starring on Castle as a dedicated FBI agent working with Castle (Nathan Fillion), Becket (Stana Katic) and the rest of the precinct detectives, so, it’s not surprising that he’d be anxious to do his own stunts on the show. In fact, he worked hard to convince the producers that it was a great idea that would benefit the episodes.

“The initial plan was to have us hop out of the helicopter after it had hovered just off the ground,” he confesses. “I turned to the producer at some point and said, ‘Why don’t we just go up?’ Ruben Santiago Hudson (Captain Roy Montgomery on Castle) looked at me and said, ‘I’m claustrophobic, man. I don’t know if I want to spend anymore time in here than I have to.’ I said, ‘Come on, it’ll be fine.’ I talked him into it and then the producers came back and said, ‘Yeah, OK.’

So, off they went – high above Los Angeles at night (doubling for NY of course), with Pasdar soaking up ever moment in the air.

“Looking down, it was an amazing approach,” he gushes. “Very hot, we came in very fast, touched down and we jumped out and walked up to a van that may or may not have a bomb in it. You can’t have a stuntman do that. There is no reason for it. It was a lot of fun.”

One man’s fun is another man’s terror, but Pasdar has taken chances that are far more frightening than a late night helicopter ride.

“I just sailed with a friend of mine on my boat to Kauai from Marina del Rey and it was the most incredible thing I’ve ever done. It was the most peaceful, relaxing thing I could ever imagine, but people say it was crazy for two people to head off like that,” he stresses. “I say that’s how we got where we are. People have done that for centuries. I was just engaging in an age old way of getting from one place to another and it was quite an adventure.”

He has got more on his adventure docket, too. Pasdar is already prepping to reach Advanced Base Camp on Mt. Everest. And the fact that he has not climbed previously means little to the actor.

“It’s not that technical getting to Advanced Base Camp. It’s just arduous,” he claims. We’re not so sure, but that’s not going to hold him back.

“It’s more of a physical drain,” he insists. “Everest isn’t the most technical of climbs. There are much harder climbs technically. It’s more of a stamina, weather, window, frostbite, lose-a-limb sort of thing. I wouldn’t put it that way to my wife, though.”

Pasdar’s wife is Natalie Maines, one third of the famed Country Music trio the Dixie Chicks. The couple has two children and Pasdar tells HollywoodOutbreak.com that he has to engage in those activities to stay physically and mentally balanced.

“Me not doing things like that…I get grumpy if I’m not out there doing stuff, Pasdar points out. “ She knows, she’s smart; I support everything she does and she supports everything I do and that’s what makes a marriage last.”

Besides, the actor says he stays in shape that way and – with a father who is a heart surgeon – Pasdar learned from a very early age the benefits of moving your body.

“I can’t express in significant enough terms how I was raised in understanding how the organs work and how they’re immediately connected to your daily behavior,” he says. “The more blood you pump the stronger your muscle gets. That’s the whole point behind exercise. To be able to continue that in my 40s and learn from seeing the patients my father operated on – the lives he saved – so, of course, staying active throughout your day is key to staving off the inevitable.”

Yes, but there are safer ways to do it. I would suggest a lengthy hike with the family, but then I’m guessing it wouldn’t be near good enough for an adrenaline junkie like Pasdar. Still, you’ve got to admire his tenacity.