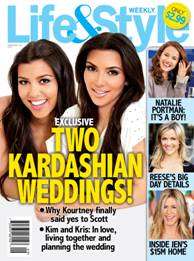 Life & Style reports (exclusively) that Kourtney Kardashian ascented to longtime gentleman-friend Scott Disick‘s proposal of marriage.  All this in time for the concluding episode of Kourtney and Kim Take New York.

“The season finale, which has already been filmed, ends with Scott proposing and Kourtney accepting,” a snitch close to Kourtney tells Life & Style, confirming that the once volatile pair, who have a child together, are finally serious. “It’s been really hard for them to keep it quiet. She’s so excited for the finale to air this April so she can finally go out in public with her ring on. She wears it at home all the time.”

The Kardashian group have accepted Scott into their tight circle. “The family is really happy about Scott and Kourtney’s engagement but they’re trying to keep it a secret so it’s a huge surprise on the show,” another insider tells Life & Style.

Kourtney‘s sister Kim is dating NBA player Kris Humphries and has plans of her own. “We have a lot of things going on and a lot of things to look forward to, too. I think life can only get better for us,” Kourtney said.

For more, the new issue of Life & Style Weekly is on newsstands now

For more go to WWW.LIFEANDSTYLEMAG.COM