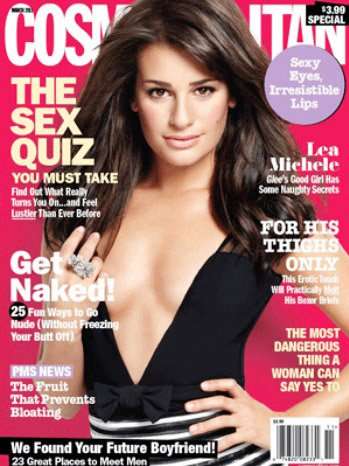 “Near pornographic pedophilia,” the Parents Television Council said of a Lea Michele photo on the October GQ cover.  Now the Glee nice girl illustrates what to do when preparing to undress on the current issue of Cosmopolitan.

“We’re thrilled to feature Lea Michele on the March cover of Cosmopolitan magazine and think she looks stunning,” a Hearst spox told Fox. “Michele is a grown woman and Cosmopolitan is a magazine is for adults.”

True, she is at least physically grown.

“We all realized that we have to be a little more careful when it comes to sexuality,” Glee founder Ryan Murphy told The Hollywood Reporter.

Along with Michele‘s physiognomy and physique, a Cosmo reader can also find out what really turns you on…and feel lustier than ever before; For his thighs only; 25 fun ways to get naked; The most  dangerous thing a woman can say yes to, PMS News, the fruit that prevents bloating, and a whole lot of other nifty things for the thinking adult.