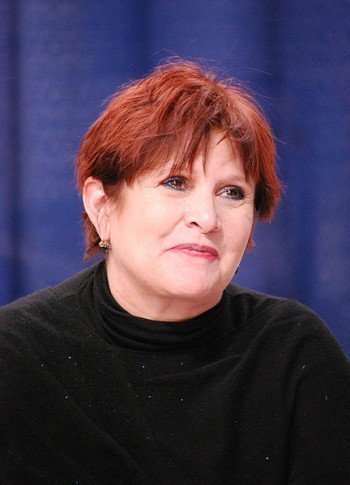 Of course it wasn’t yesterday when Carrie Fisher starred as the thin (but curvy) Princess Leia Organa in the Star Wars trilogy, but today she has grown into a shockingly heavyset lady.

Every curse has a blessing (sort of) and Jenny Craig knows a advertising goldmine when they see it.

The weight losing corporation has invited Fisher to be their new marketing face where she will (like other Craig celebrities) lose weight fast and dramatically.

Fisher has traveled a tortuous journey since her pin-up days, medicating herself for her (then) undiagnosed bi-polar disease into serious addictions.

Now at 54, Fisher says that she is 75 pounds heavier than most remember and telling People magazine that “All the clothes in my closet belong to another chick.  They have to make a new alphabet for my bra size.”

While she overcame her drug and alcohol addictions, Fisher turned to food, lots of it, especially ice cream bars.  She even makes fun of herself in her one-woman show Wishful Drinking.  It was here, three years earlier that she began to gain so much weight.

But then something happened that woke her from her various denials.

“I look on the internet and they say, ‘Whatever happened to Carrie Fisher? She used to be so hot and now she looks like Elton John,” Fisher said. “I was really hurt.”

The blogger humiliation, although unfeeling and insulting, perhaps pushed Fisher into agreeing to Jenny Craig when they finally approached her.

Anyone who could conquer their many other serious addictions should be able overcome and reverse their (fairly recent) eating disorder.  Fisher has already dropped 12 pounds while replacing her other compulsions with a new one; exercising.