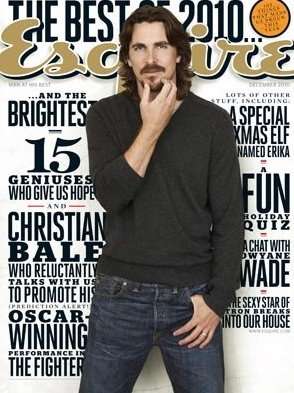 Christian Bale does "Esquire" - December, that is (Hearst Corpration)

Either his agent/manager tells him to play the public image of a Brandoesque rebel or Christian Bale really is, well, anywhere from unpredictable to explosive.

Bale was unfairly depicted (by various media) as a bratty diva when the Terminator Salvation cameras recorded his profane outrage at a crew member for breaking his acting concentration in 2008.

In interview excerpts from December Esquire, Bale may seem less of a wild man, but (if words speak louder than actions) the Batman star is merely cranky, bored, unfulfilled.

“I have a very sissy job, where I go to work and get my hair done, and people do my makeup, and I go and say lines and people spoil me rotten. And everyone has that kind of curiosity of how far can you go, how far can you take it. I think it’s always good testing yourself. With various things that could be incredibly unimpressive to other people, but there’s some meaning to it within yourself…”

If only the young star-struck would listen to Bale, there’ll be far less angry, struggling actors who waste their lives.

“Well, it’s embarrassing to be a star. Most people look at you like, ‘That’s not a f—ing job, is it?’ And then on top of that, you learn very quickly that you’re just a tool — other people are manipulating everything you do, you’re at the mercy of editors, and there’s nothing you can do. But I learned that there’s a certain character that can be built from embarrassing yourself endlessly. If you can sit happy with embarrassment, there’s not much else that can really get to ya.”

So what does a loving childhood, storybook life and the one-in-a-billion chance of super-stardom make you?

While Bale‘s candor is interesting, even welcome, his angst and restlessness doesn’t quite wear well.  Only Brando, McQueen and Charles Branson got away with that cool, edgy act because they suffered through, conquered creepy childhoods, endless labor.  Bale‘s earliest moments were reportedly less working-class heroic.

Perhaps Mr. Bale should research the proletariat life and work minimum-wage retail.  He’ll no longer feel he hasn’t got a real job.  Or a sissy job.  And he’ll be so busy and stressed he’ll never be bored.

All us wage slaves don’t know how lucky we are.