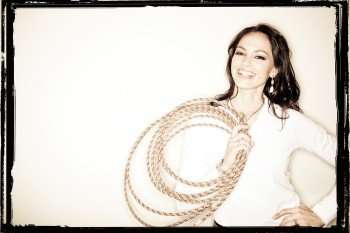 Country folk are like no one else. Even the biggest of stars remain down to earth and still do their chores. That was certainly the case when I got the chance to talk with Joey Martin Feek of Joey and Rory fame. Feek has just finished cleaning her home and washing her breakfast dishes when our conversation began.

If you are not familiar with the married duo, think back to the Overstock.com commercials with the couple celebrating Christmas singing with family and friends.

Since that time, Joey and Rory have gotten plenty of attention and are nominated for a Best Duo Award at the Country Music Awards tonight. The couple is competing with the likes of Brooks & Dunn and Sugarland for the honor. All this attention on the heels of winning Top New Vocal Duo at the Academy of Country Music Awards just this past spring.

“That was as thrill,” she acknowledges. “That was another milestone that we didn’t see coming from anywhere. Sometimes it’s best when you just show up and present yourself as best you can and just let magic happen.”

The recognition is great, though Joey tells us she’s just amazed they’re in the same company with those other superstar performers.

“I don’t know if they just needed more people to fill that category or not,” she says laughing. “We were up for the award last year at the CMAs and that’s a big deal because there are a lot of talented duos out there. To be up in the category with Brooks & Dunn, Sugarland and Montgomery-Gentry, who have been out there for a long time, it’s one of those amazing things.

“We don’t take any of those awards too seriously. We get excited about it, but at the same time it’s a date night for Rory and me. We get dressed up and take a few pictures. We don’t put too much emphasis on winning or losing. To be nominated is an honor.”

However, she is pleased that her honey, Rory Feek is nominated in two categories for songwriting.

“A young guy named Easton Corbin had a song out last year that Rory co-wrote with some of his friends (Don Poythress and Wynn Varble) called A Little More Country Than That,” she points out. “It’s up for Single of the Year and Song of the Year, so, that’s a huge deal. I think I’m most excited about that. To be nominated as a songwriter – that is a big deal.”