SHAPE MAG ASKS FOR ‘ANOTHER CHANCE’ OVER LEANN RIMES COVER 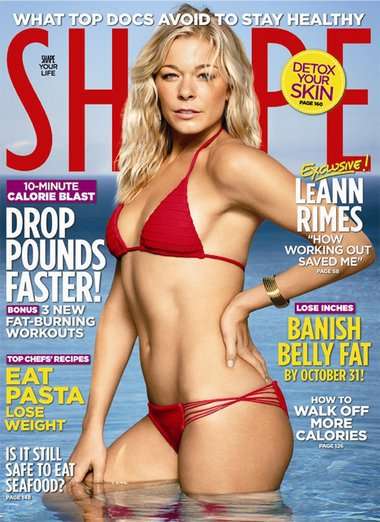 “…you all agree Shape has made a terrible mistake in putting LeAnn Rimes on the cover,” chief editor of Shape magazine emailed readers.

The apology was because of complaints regarding Rimes’ alleged back alley romance with then-married Eddie Cibrian.  Rimes was married to someone else at the time as well.

The editor, Valerie Latona said that Shape needed to clarify (not excuse, but explain) why Rimes, as opposed to a billion other women, graced its cover.

“Please know that putting her on the cover was not meant to put a husband-stealer on a pedestal – but to show how we are all human.”  The human line is apparently meant to refer to LeAnn, so that we don’t mistake her for a soul-less android.

The Rimes cover story, How Working Out Saved Me, supposedly showed all of us how “this woman in particular,” Latona soldiered on, “found strength in exercise in what she said was her most difficult personal moment.”

Difficult personal moment.  It takes a lot of angry emails to get an editorial staff to write a lengthy apology, along with a plead to their readers for another chance.

Similiar to HollywoodOutbreak‘s story yesterday on Marie Claire‘s idiotic Should Fatties Get a Room? post.

Difference is that the Shape dispute is over spotlighting a controversial face and voice, while Claire is about savaging much of humanity.  A footnote is that Latona took the heat while Claire‘s editors forced their story’s writer to apologize (although they had allegedly inspired the project originally and green-lighted the proof sheet before press (upload?).

The ex-Mrs. Cibrian, (Brandi Glanville) the lady lost in all this, is embittered about the turn of events, letting the media know exactly what she thinks about (alleged) home-wrecking Rimes.