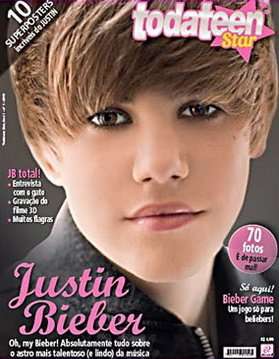 Justin Bieber, teen rocking, cottage industry sensation, pushing the hell out of 16, is on track as a bigger retail name brand than Krusty the Clown.

Not that there’s anything wrong with it.  Most who can get royalties from a pet rock with their embellished face will do so.

Coinciding with a face cover on Todateen magazine (along with questions about the mag photo’s eye makeup and airbrushing), is the introduction of Bieber‘s new My World fragrance.

And not just any celebrity-endorsed product but an andrognyous perfume that will reportedly be contained within dog tags and waistbands.

Of course Bieber didn’t concoct the perfume in his bathtub but rather put his name, face, approval on Etoile Nation Beauty‘s invention, where little girls and boys can “…mix and match, trade and take the scent on the go,” the Etoile president proudly announced.  “Fragrance will be as simple as switching from one dog tag to another.”

Other Bieber toiletries include a designer nail polish line, and just over the next mountain there’s a Bieber “signature doll.”

How much money can be gleaned from sitting back on your royalties?  Well, deceased Michael Jackson‘s estate reportedly gets something in the $200 million-a-year range.