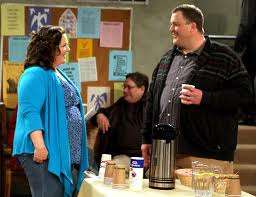 Thousands of Marie Claire readers threatened to cancel subscriptions, all because of a little post on their blog titled, Should Fatties Get a Room.

The story by some freelance writer (God must have loved them, He made so many) was unkind (even by my troglodyte standards) to people of stout builds.  The scribbler (Maura Kelly) took issue with the CBS series, Mike and Molly, by using (among other things) a dead explicit simile comparing the antagonism of looking at the full-figured to “watching a very drunk person stumbling across a bar or a heroin addict slumping in a chair.”

Well, the editorial staff must have laughed their butts off (no pun) when they green-lighted the 500 words.

Ms. Kelly was left to twist in the wind (forgive the dying metaphor) because she was forced to plankwalk an apology at the end of the offensive piece.  The only comment from Clare was to describe Kelly as “a provocative blogger.”

Are TV viewers uncomfortable watching overweight people being intimate?  That was the gist of the editorial story conference inspiring the post, Kelly said.  So there’s blame to go around, but someone (only one) had to be sacrificed.  No word yet on reaction to the apology.

We may assume that ridicule of the plus-sized will now be more sensitively managed by Marie Claire.