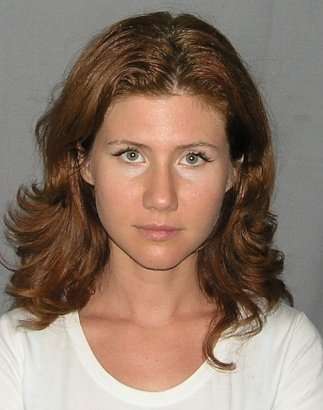 It’s no longer the KGB since the communists got lined up on the Baltic and told to swim for it.  Today it’s the SVR, the Russian Federation‘s external intelligence agency.  And apparently some thrilling things (like spying) are just to hard to stop.

Chapman pleaded guilty (there were nine others involved) to a charge of conspiracy to act as an agent of a foreign government without notifying the U.S. Attorney General (something like running a mortuary without a license, then explaining what all those corpses are doing in your crawlspace).

Little Anna was then sent back to the old country earlier this year.

If you want to know the particulars of this silly case, all the hours of transcripts can be had with a keystroke.

Now, back to the only Russian spy who knows what to do with lemons.  Living in America and Britain gave Chapman enough drive to go out and test her fame-miking waters. 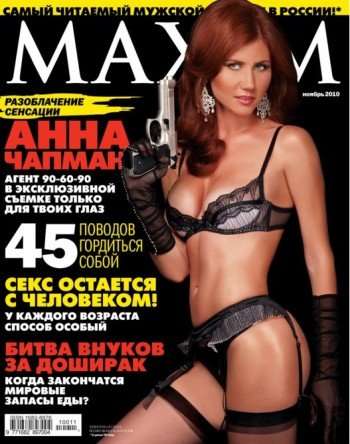 Well, if you don’t mind mixed metaphors, Anna didn’t immediately hit paydirt.  Landing upright in London she found that she was no longer a U.K. citizen and had to schlep back to Russia.

Although she was called the modern Bond girl, femme fatale, flame-haired beauty, SoHo spy, and her Facebook along with many videos on YouTube were viraled, she was still adrift.

Now, with pluck, luck and chutzpa, the news today is that Chapman crawled her way onto the cover of the Russian version of  Maxim, wearing only a creepy come-to-bed-with-me look with wide-set eyes and bondage (not like in James Bond) peek-thru black lingerie, holding a pistol in a phallic way that is not kind.

But wait, that’s not all;  reports abound, though Anna denies (cynics suggest that MBA grad Chapman is tiptoeing over the minefields of income likely to be seized by Uncle Sam) that she’s sold her life story (all 28 breathtaking years) and has finally elbowed her way into all that fame-hooking that leads to the plutocratic life she saw close up in New York.

So don’t think that all this is just a meaningless event where a bunch of things happened without significance.  The moral is that, unlike western Europeans, Americans admire self-made people, and we forgive, sometimes love rogues who don’t murder (or steal from the poor), but only do a little harmless spying for our now commie-hating Russian friends.

Business and black-copter trained Chapman is on her way because no matter how many times she fell from the perch, her kind always lands on its claws.