WHO CHOOSES THE SEXIEST WOMAN ALIVE AT ESQUIRE? 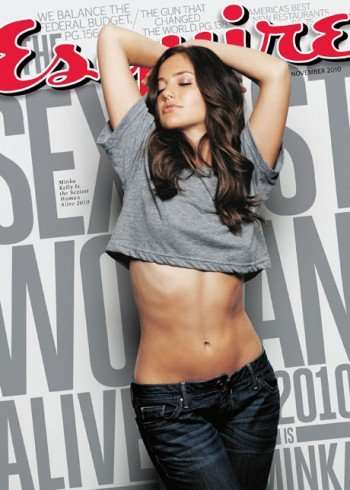 After having interviewed four billion other contestants, Esquire magazine has chosen Minka Kelly as this year’s Sexiest Woman Alive.  Just kidding, actually it’s 191.  The part beginning with the word Esquire is accurate.

Who decides such an important decision?  “…editors of Esquire’s 17 international editions” and “…presidents, human-rights activists, models with legitimate hearts of gold, and this one incredible actress from India.”

And just what are the criteria at Esquire for such a title?  Well, the Esquire blog says “Not necessarily the sexiest, what’s the point of a beauty pageant, really? Shouldn’t the women of the world be celebrated for who they are…”
So who is Minka Kelly, aside from Yankee Derek Jeeter‘s actress girlfriend?  “…something different, something beautiful, something that reveals a little bit more about who we are.”
So, who are they?  Cool, hip and aware in every way.  They keep saying.
Apparently the most salient feature for Esquire‘s sexy candidate may be how beautiful her political belief system looks.
As you might guess, there is another category that Esquire has for the Sexiest Republican Women, titled How D.C. Became Hollywood for Semi-Attractive People.

Now that we know who judges (important, beautiful, ethical people, though no names mentioned) and what is sublime (celebrated for who they are…reveals a little bit more about who we are..”),  it’s instructive to see the accompanying video at the Esquire site to better understand who she is/what we are.