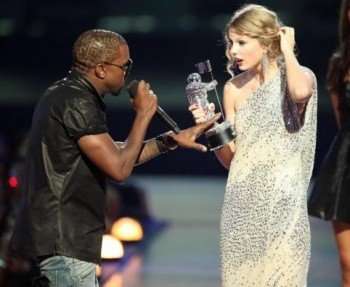 Poor Kanye West. At least that’s what he’d like us to think. The Rapper/Producer got all a Twitter explaining how his life has been damaged since he took the microphone from Taylor Swift and proclaimed that her MTV Video Music Award should have gone to Beyonce.

On his Twitter account, the Rapper tweeted much about how “deep” the “scar” has been and how he’s “bled hard.” He claims he’s received death threats, cancelled his tour with Lady Gaga and closed the doors to his clothing office.

It’s kind of hard to sympathize. West is known for being a brat – remember his antics at other award shows when he wasn’t recognized for what he thought he deserved? How about right after Hurricane Katrina when he proclaimed that George Bush didn’t like black people?

Still the public let it go…until he took aim at America’s teen sweetheart Taylor Swift. Then they’d finally had enough, talented guy or not.

It appears, despite the backlash, West still only has enough room in his heart for himself.

About the planned tour with Lady Gaga that was cancelled because of low ticket sales he wrote, “I’m the guy who at one point could perform with Justin Timberlake on stage and everyone would be sooo happy that I was there. People tweeted that they wish I was dead … No listen. They wanted me to die people. I carry that. I smile and take pictures through that.”

Rough year, but maybe it really has been a wake up call for him…at the very least we at HollywoodOutbreak.com would hope for an ego check.

Along with another apology to Swift, West says he’s written a tune for her to perform and “If she won’t take it then I will perform it for her.”

Swift showed enormous grace under pressure the night he ambushed her, but it’s probably a good bet she thinks about that event from time to time and still shakes her head.

Swift doesn’t need music from West, but he would surely benefit from Swift performing his tune.

Maybe West’s fans are ready to forgive and forget, but Swift’s audience and the many people without a dog in the fight, who saw his rude behavior, are another story. Good luck getting them to buy into his newest apology.