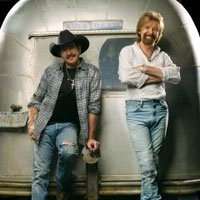 We all knew it was coming – Brooks & Dunn officially ended their final tour Thursday night at Nashville’s Bridgestone Arena. Though it’s sad, the memories these two gents have given Country Music fans over the last 20 years is the stuff legends are made of.

If you’ve never seen Brooks & Dunn live – what a shame because the pair knew exactly how to rev up an audience and keep the energy going. Their songs were upbeat – often heartfelt – but mostly just plain fun (think Play Something Country, Put a Girl in It and Believe).

Together they’ve amassed 10 studio albums – now they’ll each pursue solo careers. Fans will most likely continue their love affair with them separately – but who won’t be pining for the guys we learned to love from the very start of their pairing with the debut album Brand New Man?

And Country Music knew what it had with Brooks & Dunn. Together Kix Brooks and Ronnie Dunn have nabbed multiple awards in the Country Duo category. So many in fact that nearly everyone began referring to that category as the Brooks & Dunn Award at the Country Music Awards. Between 1992 and 2006 (except for 2000 when Montgomery Gentry took the prize), they won that honor. Of course they’ve been nominated again this year (which will air November 10th).

They announced the Last Rodeo tour just over a year ago and though we all had plenty of warning, it still feels way too quick to digest.

Click onto video for the official Play Something Country music vid.