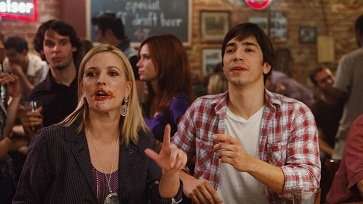 Going the Distance opens nationwide today, and although Drew Barrymore comes off as sweet as apple pie, her co-star (and boyfriend) Justin Long tells us a rather surprising secret: Drew actually has a potty mouth!! The movie, which centers on a young couple who try to make their long distance relationship work (he’s in New York, she’s in San Francisco….hence the Skyping), will try to beat out fellow newcomer Machete and Resident Evil: Afterlife at the box-office.  However, the recent romantic comedy The Switch has sputtered its way through summer, and Justin Long, though an amiable enough Apple pitchman, can’t hold a candle to Jason Bateman. Speaking of Long, click on the media bar to hear his take on Drew Barrymore’s dirty mouth (Going the Distance also has its share of foul language which is intended for laughs).[MEDIA=3854]