WHERE MEN ARE MEN AND WOMEN ARE GLAD OF IT 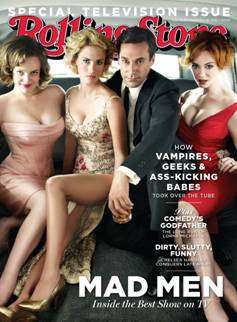 Rolling Stone magazine calls the AMC series Mad Men the best show on TV. While it may not live up to that platitude, there’s an argument that the show approaches (television standards of) literature.

Weiner Media‘s Mad Men “is an elaborate pageant of American fantasies — guys and dolls who look like they have it all, even when their private worlds are complete frauds. The advertising wizards of Mad Men swagger through the office, knock back cocktails, knock back lovers. They live out JFK-era America’s tawdriest dreams, almost as if it’s a professional code — to sell these dreams to America, they have to experience them from the inside, with all their inherent betrayal and manipulation.”

It has been a long night and day, so this last paragraph has been shamelessly appropriated from the September 16th, issue of Rolling Stone, on newsstands tomorrow, excerpts on the web now.  With blessings from Weiner Media.