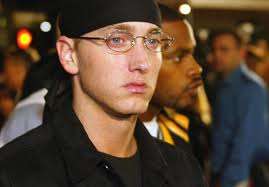 Rolling Stone magazine’s 82nd greatest artist of all-time, (Scottish, English, Swiss, German, Polish) hip-hopper Eminem got the controversial buzz he likely wanted with his Love the Way You Lie music video.  Rihanna croons the upstroke while Eminem raps the answer.  Dominic Monaghan mouths the lyrics while playing the husband in this 276-second slice of life.

The publicity-driven controversy is the domestic violence angle.  Other slams targeted intermingling violence and sex.  The lust is actually deep kissing (with relatively little heavy petting) and the fighting is mainly Megan Fox (the actress playing the wife) teeing off on poor Monaghan.  Toward the end, Dominic gets displaced revenge by beating some pool-player to (near) death.  To some it’s all poetry.  “Trying to make this tough subject work visually is a challenge,” singer, performer, producer, songwriter and post-talent poet Eminem said, as if talking about the original release of Citizen Kane. “It was great to have Rihanna, Megan and Dominic on board for this.  They really brought it and made this video super-powerful.”

Rihanna is a good choice for the video, having endured her own domestic nightmare from boyfriend Chris Brown in a well-publicized story the night before the Grammys last year.  The police shot of Rihanna‘s beaten from here to kingdom-come aftermath was splashed on every TV screen.  In the current video she snarls to the camera, singing “I like the way it hurts…I love the way you lie.” Art imitates life.

The most immoral thing in the show is Monaghan stealing a bottle of vodka from a liquor store.  The whole video is less outrageous than the 1976 Sunset boulevard billboard sign of a bound, beaten beautiful girl saying in ecstasy, “I’m Black and Blue from the Rolling Stones — and I love it!.”  The Stones got their publicity too, but the sign wouldn’t seem too wrong today because sex and violence is mainstream now.  Like cussing, and…make your own list since cultural judgments have been outlawed.