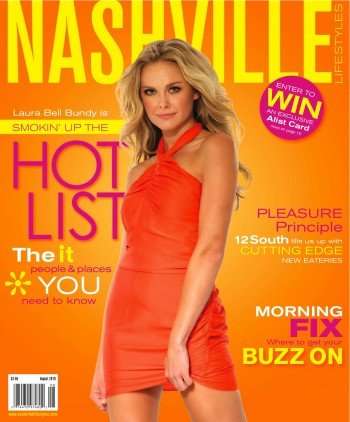 Laura Bell Bundy’s career is gaining momentum and has been since her appearance on the Academy of Country Music Awards this past spring performing her hit tune Giddy On Up.

The Country Music singer has just released her second single, Drop On By, off that same Achin’ and Shakin’ CD.

Bundy is also featured on the cover of Nashville Lifestyles’ August Hot List issue – and beginning tomorrow, fans of Bundy and her good friend Miranda Lambert, can catch a glimpse of her in Lambert’s new music video, Only Prettier on VEVO. She’s also stopping by to perform for the season finale of Kathy Griffin’s reality show, My Life on the D List (9:00 p.m. ET/PT, Bravo).

In other words, Bundy has arrived as Nashville’s next big Country Music star.