SPARTACUS PRODUCER ASSURES THAT THIS WILL BE A “VERY SPECIAL RIDE” 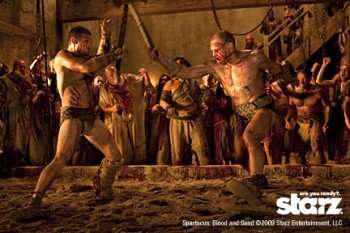 “Betrayed by his country. Beaten into slavery. Reborn as a warrior.” That’s the tag-line for the upcoming STARZ series, SPARTACUS: BLOOD AND SAND. At the recent press event for the series, producer ROB TAPERT was on hand to preview scenes and assure us that this series would be unlike anything we’ve seen on television. Influenced greatly by “300,” in the style of popular graphic novels and heavily infused with sex, SPARTACUS promises to be a far cry from the 1960 KIRK DOUGLAS version we grew up with. According to TAPERT, who was also behind TV’s HERCULES and XENA:WARRIOR PRINCESS, this show will have a special flavor all its own. Listen in below:
[MEDIA=2550]
SPARTACUS: BLOOD AND SAND debuts on STARZ 1/22.
Share
Facebook
Twitter
ReddIt
Tumblr
Pinterest
Linkedin
Mix
Email
Print