ON THIS DAY IN SHOW BIZ: STEVE MARTIN BORN 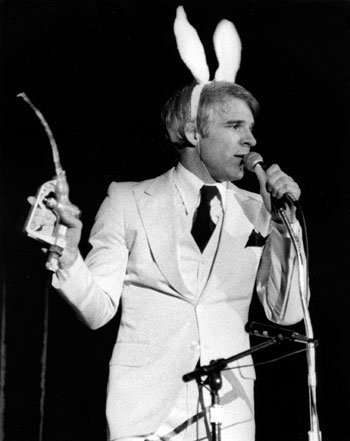 On this day in 1945,  comedian, actor, and writer Steve Martin is born in Waco, Texas.

The son of a real estate executive, Martin moved to Garden Grove, California, as a child, where he worked at Disneyland during his teens. At Disneyland, he entertained crowds with magic tricks and later with banjo music and comedy. He eventually studied theater arts at UCLA and broke into show business as a comedy writer. In 1969, he won an Emmy for his writing on the hit comedy show The Smothers Brothers and later wrote and appeared on other comedy-variety shows, including The Sonny and Cher Comedy Hour.

Meanwhile, Martin began performing his own comedy at nightclubs and on records. He was soon guest-hosting The Tonight Show and appearing on Saturday Night Live, notably in the role of the “wild and crazy guy.”

Martin made his film debut in 1977 in The Absent-Minded Waiter, which he wrote. After playing small but entertaining roles in Sgt. Pepper’s Lonely Hearts Club Band (1978) and The Muppet Movie (1979), he starred in his first big hit, The Jerk (1979). He appeared in numerous comedies in the 1980s, including All of Me (1984), Three Amigos (1986), and Roxanne (1987), a modern adaptation of Cyrano de Bergerac, for which he won the Writer’s Guild Award for Best Adapted Screenplay.

Martin is also a leading art collector, a playwright, and an author. His play Picasso at the Lapin Agile ran in Los Angeles and New York in the 1990s. His novella Shopgirl, published in 2000, became a bestseller, and he frequently contributes to The New Yorker.