ON THIS DAY IN MOVIES: OCEAN’S ELEVEN 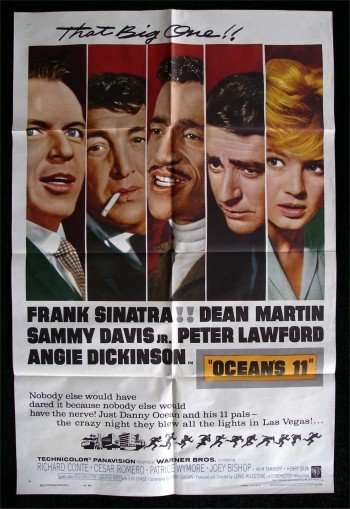 On this day in 1960, WARNER BROTHERS released OCEAN’S ELEVEN. Directed by LEWIS MILESTONE, this film existed for the sole reason of giving FRANK SINATRA and his drinking buddies something to do…and audiences were all the better for it. Famous for the hi-jinks that went on off-camera as much for those that went on in front of it, SINATRA, DEAN MARTIN, SAMMY DAVIS JR., PETER LAWFORD and JOEY BISHOP will always be known as THE RAT PACK that starred in OCEAN’S ELEVEN.

Though you won't see Bryce Dallas Howard on The Mandalorian, she will once again be part of the show's guiding force in Season 2,...
Read more

Believe it or not, there's talk of a possible Oscar nomination for Sacha Baron Cohen! Sure, his new film Borat Subsequent Moviefilm has been...
Read more

Someday, if somebody hasn't already, a fascinating doctoral thesis will be written about the psychology of game show contestants. People just seem to act...
Read more

Over the course of the past 35 years, Michael Rooker's appeared in dozens of TV shows and movies, including the two Guardians of the...
Read more

With less than a month remaining until the general election, HBO Max has revealed the trailer for A West Wing Special to Benefit When We All Vote,  which...
Read more

Radha Mitchell: There’s More To ‘2 Hearts’ Than A Love Story