ON THIS DAY IN SHOW BIZ: BUGS BUNNY DEBUTS 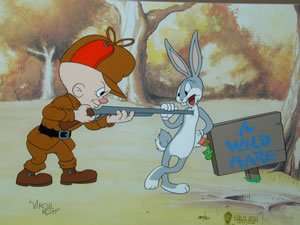 On this day in 1940,Bugs Bunny first appears on the silver screen in “A Wild Hare.” The wisecracking rabbit had evolved through several earlier short films. As in many future installments of Bugs Bunny cartoons, “A Wild Hare” featured Bugs as the would-be dinner for frustrated hunter Elmer Fudd.

Cartoon animation first appeared in 1908 in France, followed quickly by American cartoons. In 1909, a newspaper cartoon artist named Winsor McCay created Gertie the Dinosaur, the first animated character to appear regularly on the screen. In 1918, McCay produced The Sinking of the Lusitania, the first feature-length cartoon. A variety of recurring cartoons developed by the late teens and early ’20s, and these characters became more popular after the development of sound pictures in the late 1920s. Walt Disney introduced the Silly Symphonies cartoons and created Mickey Mouse and his gang. By the mid-1930s, Disney was making feature-length musical cartoons like “Sleeping Beauty.”

Under the direction of animation director Tex Avery, Warner Bros. developed its own set of cartoon stars, including Bugs, Elmer, Tweety, Daffy Duck, Porky Pig, and many others. Bugs was animated by Chuck Jones, and his famous accent came from legendary voice man Mel Blanc. Blanc started with Warner Bros. in 1937, creating the voices (or sounds) for Bugs, Road Runner, Sylvester, and Tweety Bird, among other characters.